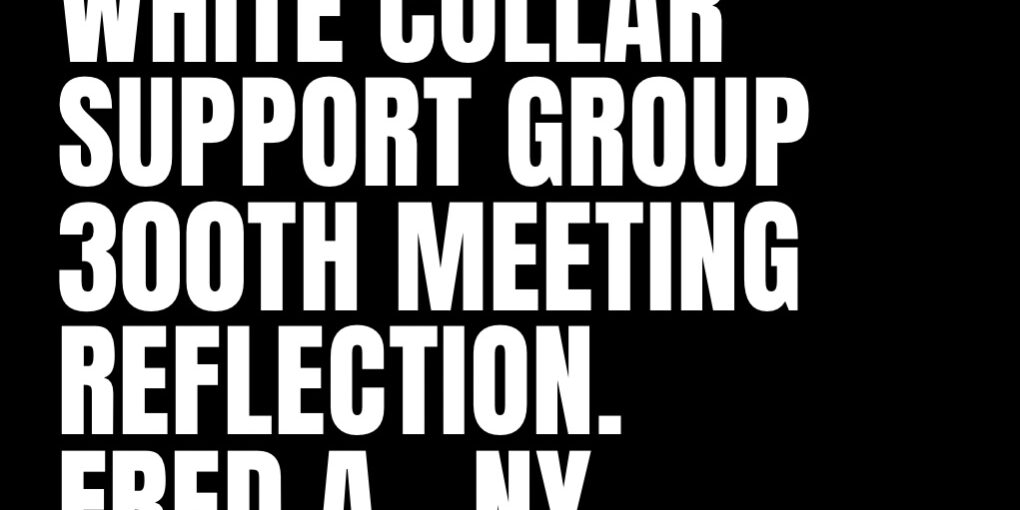 Fred A. is a member of our White Collar Support Group that meets online on Zoom on Monday evenings. We will celebrate our 300th meeting on March 14, 2022, 7 pm ET, 4 pm PT.

I was a little late to the Group, having first heard about Jeff Grant and the White Collar Support Group after reading the article in the New Yorker this past summer. Not only did the article pique my interest in the Group, but I also saw that Jeff had been able to get his law license back after being disbarred. My law license had also been suspended in connection with my criminal conviction, so I reached out to Jeff seeing if he could give me some advice on applying for reinstatement to the New York State bar. Not only did he immediately answer my email and provide me with some extremely helpful pointers, but we also set up a Zoom call where we learned that we grew up in the same town on Long Island and had many friends and acquaintances in common. Jeff invited me to join the Group, and I am glad I accepted the offer as it has given me the opportunity to help others who are going through this process, while also helping myself.

My path to this point has been fairly long and quite arduous. However, to most of those in the Group, my story is quite common. I had been served with a subpoena from the SEC in February 2011 concerning a major client. The SEC sued my former client and me in October 2011, with the lawsuit leading to a full-blown criminal investigation. I was indicted and arrested at home at 5:50 AM by 8 heavily armed FBI agents in April 2012. Had I been a member of the Group, I would have been better prepared for this entire process. Instead, my family and I suffered through 5 years as my criminal and civil cases dragged along parallel tracks. I eventually settled with the SEC in 2014, and on the eve of my criminal trial, pled guilty to one count of being an accessory after the fact to a securities fraud conspiracy. My civil penalties were over seven figures, while my criminal sentence was 14 months with six figures of restitution. I consider myself fortunate since my sentencing guidelines were for 30 to 60 months. Nevertheless, I entered FCI Otisville Camp on May 31, 2017 having no idea what to expect. Again, had I been in the group, I would have been able to avoid most of the pitfalls that awaited me when I reported for my 328 days at Otisville.

I got out of Otisville in April 2018, and completed a year of Supervised Release the following June, but I am still wrestling with many post-incarceration issues, including restitution, professional licensing, and some emotional issues. Getting the chance to meet with other people who are in a similar situation has given me the opportunity to address some, if not all, of these issues. It has also provided me with a positive outlook on the future, a perspective on my past, and a knowledge that things are getting better for all of us.

What I’ve found in the Group is a diverse gathering of individuals who are seemingly on the same continuum of the criminal justice system, but at different stages in the process. Each person has their own story to tell of what has or is still happening, and how it has harmed their life and their family. But, while each one is unique with his or her own particular nuances, each experience I heard has resonated with me. There is something in each member’s life story that triggered a memory from my own criminal justice experience. Things like the FBI raid of my home, the delays in the process, the fear of the unknown going into sentencing or reporting to prison, the everyday challenges of incarceration, and the issues of reintegrating into society. There is so much familiar, and so much I had unwittingly suppressed, if only to get through each day. It is like each of us has our own, unique story of how we have been impacted by the criminal justice system, but collectively we are one, with so many commonalities in the process, the emotions, and the damage. It made me realize that the only way to get through this, the only way to make sense of this, the only way to effect change is to do it together in a group like the White Collar Support Group. I give Jeff and the other members a great deal of credit for putting the Group together and keeping it going for 300 meetings.

So if you think that hearing from one person who has been or is going to be incarcerated, you’ve heard all you need to know about the criminal justice system, then you are wrong. But it’s actually the other way around. In order to fully grasp this situation, you need to hear from everyone can in order to get a clear understanding of the situation. The White Collar Support Group gives us the opportunity for this necessary sharing of experience. So, if you’ve heard them all, then you’ve heard one.

“Jeff Grant is the Real Deal” – A Testimonial from Evan Osnos of The New Yorker
February 3, 2023