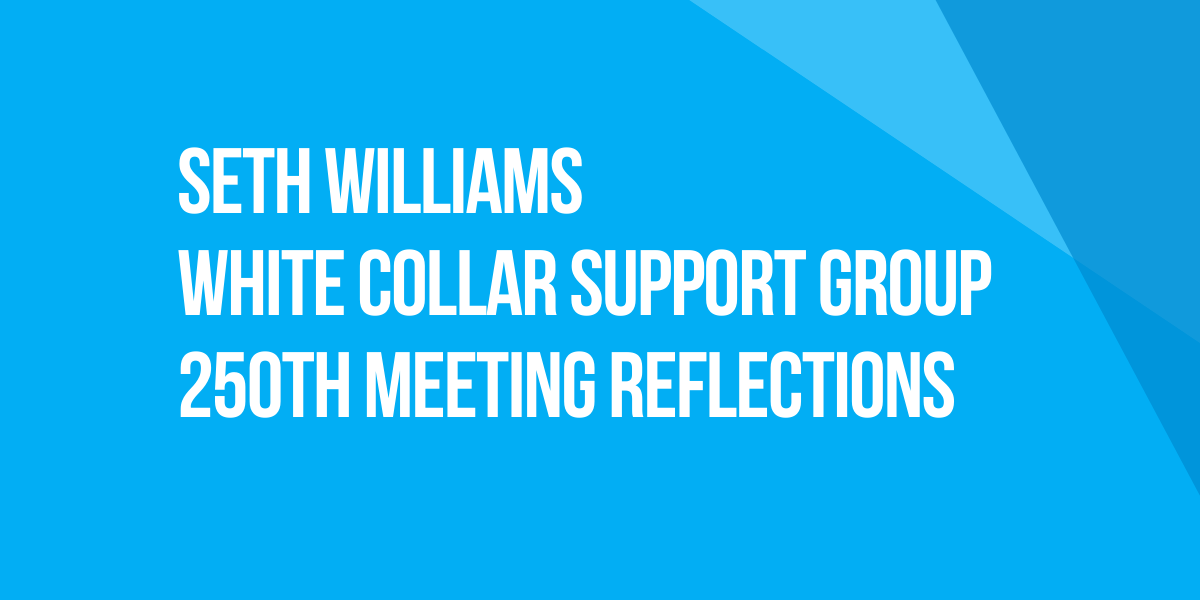 Seth Williams is a member of our White Collar Support Group that meets online on Zoom on Monday evenings. We will celebrate our 250th weekly meeting on Monday, March 29, 2021, 7 pm ET, 4 pm PT; all Fellow Travelers are invited.

Congratulations Jeff on your 250th Support Group Meeting. I felt alone, and thought there was no one that could relate to what I was going through. You have been the big brother, I never had and you have created a network of welcoming, non-judgmental, and understanding men and women that share their similar experiences in an open and nurturing environment. You are absolutely correct, “It’s the isolation that destroys us. The solution is community.” and we have you to thank for creating one for us.

I was the elected DIstrict Attorney of Philadelphia, I had spent the majority of my professional career working to prevent crime, and hold those accountable that harmed society. Never in my wildest dreams did I ever think I would be the target of a criminal investigation, indicted by a federal grand jury or serve time in prison. All of those things eventually happened and I wasn’t ready. I wish I had known then, of Rev. Jeff Grant, his Progressive Prison Ministry and White Collar Support Group. Jeff and his group are now a significant part of my life and I am eternally grateful.

As the D.A., I was responsible for the criminal prosecution of over 70,000 cases a year in a city of 1.5 million people. I supervised a staff of 600 men and women with an annual budget of over $54 million.

I had two Blackberries, one alerted me constantly of every murder, shooting, rape, suicide, missing child and stabbing. I was routinely rushed to crime scenes, trauma centers, and asked to speak at funerals and memorial services for crime victims. These daily traumas were compounded by the reality of being a political figure in a city known for politics being a dirty full contact sport.

Lunch meetings were power lunches with cocktails and every evening included multiple events where alcohol was free and flowing like a Bacchanalian feast. I increasingly began to numb myself with alcohol and the need for affection. Both made me feel guilt, and instead of dealing with the emotions in healthy ways, I drank more. A self-destructive cycle.

After my divorce, I lived beyond my means. I wanted to keep my daughters in their private school and to keep my house. I accepted gifts from my friends. I should have reported all of them and others I should not have accepted, but I was too ashamed to admit my friends helped me. Right or wrong, as the District Attorney, the mere appearance of impropriety is detrimental to the entire justice system and I failed to live up to the highest standard.

Despite having been an attorney for 25 years, with experience as an Assistant District Attorney, as an Army JAG lawyer, and as a criminal defense attorney, nothing prepared me for having the criminal justice system turn my own life upside down. The majority of questions that I had, the ones that kept me up at night or made me feel that I couldn’t hold my food down, could not be answered by my attorneys. They knew legal procedure, they didn’t know how it felt to be indicted. They understood how to file motions, they could not understand or help me process all of the unknowns. What would I be charged with? How would the public react? How will all of this affect my children, family and loved ones? I was afraid, angry, ashamed, embarrassed, anxious, could not sleep and began to drink even more. I wish I had known of the White Collar Support Group.

I recognized I was wrong to have accepted and not reported all of the gifts and I had negotiated with the city’s ethics board to pay $65,000 in fines for not reporting all of the gifts. I was still indicted with 29 felonies and faced approximately 145 years in prison. The night before the indictment was to be made public, I met with my ex-wife and daughters to explain to them what was about to happen. How do you look into your little girls’ eyes and tell them all of these things. Where do you begin? Should you be strong for them or let them see you cry? I wish I had known Jeff. I wish I could have spoken with men and women that knew my struggle.

I never thought I would be the defendant in a criminal trial. Yet every morning I went to court as the elected local D.A. and sat in the defendant’s chair in a federal courtroom.. My attorneys were friends of mine since we met on our very first day as assistant district attorneys in 1992. They fought the good fight and we had a very good first week and a half of trial. We had one very bad day and the prosecutors offered us to plead guilty to one count. I wanted to continue fighting, but my attorneys made it clear that pleading guilty to one count with a maximum exposure of 5 years was better than risking going to the jury and not knowing what could happen. We were told if I pled, I would be allowed to remain on bail until my sentencing and possibly even until my expected self-surrender to a prison camp 4 or 5 months in the future. Once again, I had a heartfelt conversation with my family. I wish I had known of Progressive Prison Ministries.

I told my daughters and girlfriend I would be back around lunch time. That I would enter the plea and come home and have the rest of the summer to be with them, sell our home, and get “my affairs in order” prior to going away. The judge had a different plan. I entered my plea, and he immediately withdrew my bail. I did not go home for lunch on June 29, 2017. Instead, I was handcuffed in court and taken underground from the courthouse to the Philadelphia Federal Detention Center. I was stripped searched, given orange underwear and an orange jumpsuit and locked in solitary confinement for 152 days. 5 months all alone.

While I was in solitary, I could speak to inmates in adjacent cells through the grating of the plumbing access panels that separated our cells It was from those men that I learned how to prepare for my pre-sentence investigation, prison programs that could reduce my sentence, how the federal bureau of prisons would determine which prison I would serve my sentence, how I could continue my relationship with my family while I would be away, and most of the questions that I had for my attorneys. Frequently the very topics that we discuss during our White Collar Support group meetings.

I had visited prisons as a law student, as a prosecutor, and criminal defense attorney. Yet, the majority of my understanding of prison life was irrationally shaped by Shawshank Redemption, The Green Mile, Angels with Dirty Face, and other fictional accounts. My fears were based on my ignorance.

I was sentenced to 60 months. As a result of an inmate telling me about RDAP (the residential drug abuse program) I was honest with the presentence investigator and shared with her my history of alcohol abuse. If not for that inmate, I would have thought sharing that truth would have hurt me even more at sentencing. If I had known of the White Collar Support Group, I would have been aware of RDAP and that completing it would reduce my sentence by 12 months. I would have learned of “Earned Good Time”, “Residential Reentry Centers”, home confinement and a myriad of

I served 5 months in solitary confinement before being transferred to the Oklahoma Transportation Center via “ConAir”, and ultimately served an additional 29 months in FCI-Morgantown. I lost my reputation, my elected office, my military career, my pensions, my law license, my home and most tragically time with my loved ones.

After my release from prison, I spent 6 months on home confinement and am now on supervised release. While there may be no one way to prepare for any of these things. I am fortunate that once I returned home I found Rev. Jeff Grant through social media, and he has greatly assisted my reentry.

Jeff listens. I look forward to our weekly White Collar Support Group meetings. I now have a network of friends that I can share my concerns with that have experienced the very same things that I am going through. I listen to people that I have lived it. I hear the good, the bad and the miraculous. These new friends are not just faces on a zoom screen. Frequently, we connect via phone or email to follow up and support each other.

“It’s the isolation that destroys us. The solution is community.” and I now have the White Collar Support Group to thank for creating one for me. Hopefully, I can give to others as much as I have gratefully received.

White Collar Week Podcast: An Evening with Our White Collar Support Group. The support group meeting on this podcast is different than most, because all of the 16 group members appearing have agreed to share their names, faces and very personal stories in an effort to reach out to individuals and families suffering in silence. All on the podcast are post-sentencing or back from prison. Watch on YouTube, Listen on Spotify, Apple Podcasts and SoundCloud, link here.