A Parable: The Shack, The Key and The Match, by Jeff Grant 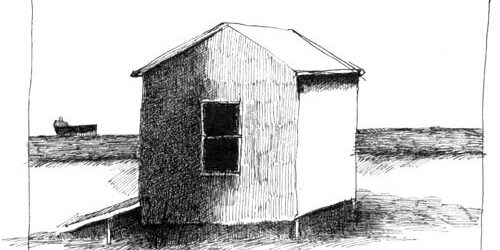 Completely unsure how he got there, a man finds himself locked in small shack, on a sandy beach next to the ocean.  The shack is very small, and somehow it is also air tight.  No air can get in and he starts to panic that he will soon run out of air.  There is door in the front of the shack and another at the back.

Just then he sees a small table in the corner with two objects.  A key. And a match.

Relieved, with the key in hand, he rushes again to unlock the front door and escape to the outside, filled with cool air.  He tries, but the key does not fit into the the front door lock. It must be for the back.  Feeling now a little uneasy, almost weary, he runs to the back door with the key.  But the key will not unlock that door either.  How could he not have the right key to save him?  Who put him in this strange place and left him the wrong key?

The man is left with just a single match as his tool to escape his horrible situation.  The air is running out and he feels it getting harder to breathe.  He knows that his time is short.  He will die if stays in this house any longer.  Just before all the air is used up, he wildly strikes the match and uses it to set the house on fire.

The flames grow up the walls and to the ceiling. They encircle him as he cowers in a corner.  The house is burning around him, it is getting hot, and the flames are too fierce to jump through.  Soon the roof will collapse on top of him.  At the very last second, he stands up and with all his might crashes through the burning flames, jumps out of the house and onto the beach just as the roof collapses down in a fiery crash.

Rolling on the sandy beach, he is burned, charred and nearly dead.  But he survived. He makes his way to the water and collapses into the cool and comforting blue ocean.  Sitting in the water, he starts to understand that although he did not possess the right key to elegantly walk out either of the doors, he had somehow been given a way to escape – even if he had to burn down the whole shack in order to survive.

After a short while he understood that the next choice is his. Will he spend the rest of his life resenting that he had not been given the right key to escape his shack without being burned, or resent all the all other people in the world that had been given the right key to escape their shacks? Or will he heal and recover, in gratitude for the second scarred and broken life he had been given?

Click here to read an excerpt from Jeff’s book, “Down & Out in Greenwich CT: An Insider’s View of Opioid Addiction, Prison and the Road Back to the Boardroom.”