WCSU panel to share perspectives on reentering society after incarceration

DANBURY, CONN. — Rev. Jeff Grant and Jacqueline Polverari, whose own experiences in federal prison inspired them to found societal re-entry services for other former inmates, will participate in a panel discussion about “Finding Hope and Purpose  After Incarceration” at 5:30 p.m. on Wednesday, Oct. 30, at Western Connecticut State University.

Grant, a former practicing lawyer who served more than a year in federal prison for a white-collar crime committed after falling prey to opioid addiction, embarked on a new career as an ordained minister with completion of a Master of Divinity degree from Union Theological Seminary. With his wife Lynn Springer, he co-founded Progressive Prison Ministries of Greenwich in 2012, a nonprofit organization dedicated to providing confidential pastoral support to individuals and families facing challenges ranging from inmate re-entry into society and substance use disorders to personal crisis management and mental health issues. He also has served as Executive Director of the Bridgeport-based criminal justice organization Family Reentry Inc., as a minister at churches in Connecticut and New Jersey, and as a member of municipal and nonprofit organization boards dealing with criminal justice and post-incarceration reentry issues.

Grant is the editor of the popular blog, prisonist.org, and co-host of the Criminal Justice Insider podcast airing from New Haven. His confidential weekly online “White Collar/Economy Exiled Support Group” has held more than 170 meetings and attracted more than 150 participants. “Sometimes referred to in the press as the ‘Minister to Hedge Funders,’” Grant’s prisonist.org biography said, “he regularly uses his experience and background to guide people faithfully forward in their lives, relationships, careers and business opportunities, and to help them from making the kinds of decisions that previously resulted in loss, suffering and shame.”

Polverari, a former title company owner who served seven months in the Danbury Federal Prison for Women during 2015 for conviction in a mortgage fraud case, has drawn from her own incarceration and reentry experiences as motivation to research women who commit white-collar crime and correlations to underlying trauma and mental health issues. After working with several criminal justice organizations, she founded Branford-based Evolution Reentry Services in 2018 with the goal of providing a comprehensive platform of integrated transition services for nonviolent women felons during and after their incarcerations. ERS has pursued collaborative partnerships with state and community service agencies to encourage networking and promote coordination of programs designed to support reintegration of former inmates into the community. Specific priorities include support in securing employment, housing, transportation, financial stability, proper nutrition and sound health.

In an interview with Forbes.com correspondent Walt Pavlo, Polverari said the organization’s objective is “to help women returning from prison put their broken lives back together.” She observed that the public has “little empathy or sympathy for this group of women, typically seeing them as privileged women who were greedy or taking advantage of others, but in reality that is rarely the case. Women are currently being incarcerated at a higher rate than ever before, yet there are few resources dedicated to guiding these women to a productive life beyond prison.”

Polverari, a graduate of Fordham University with a master’s degree in social work, has extensive mentoring and therapeutic experience and is currently pursuing a doctorate in social work with a concentration in criminal justice. She is a frequent speaker regionally and nationally on women’s incarceration and reentry topics. Earlier this month, ERS hosted the nation’s first retreat for women convicted of white-collar crimes.

Western Connecticut State University changes lives by providing all students with a high-quality education that fosters their growth as individuals, scholars, professionals and leaders in a global society. Our vision: To be widely recognized as a premier public university with outstanding teachers and scholars who prepare students to contribute to the world in a meaningful way. 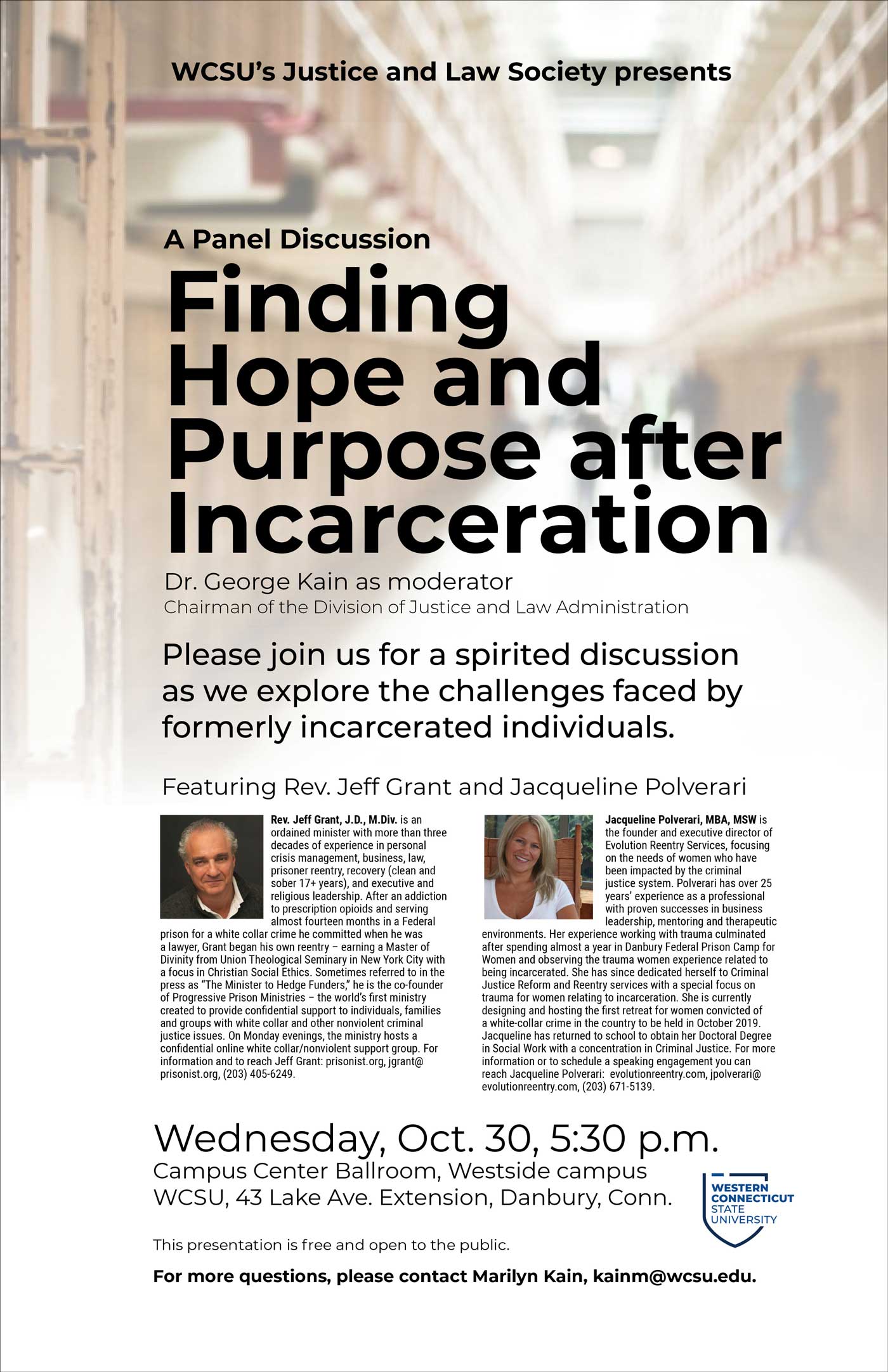 Jeff is an ordained minister with over three decades of experience in crisis management, business, law, reentry, recovery (clean & sober 17+ years), and executive & religious leadership. He provides confidential pastoral and spiritual care and support to individuals, families and groups in the areas of personal crisis management, criminal justice/prisoner reentry, opioid and substance abuse, bipolar disorder/mental illness, and interfaith religion. Sometimes referred to in the press as “The Minister to Hedge Funders,” he regularly uses his experience and background to guide people faithfully forward in their lives, relationships, careers and business opportunities, and to help them from making the kinds of decisions that previously resulted in loss, suffering and shame.

As an ordained minister, conversations and communications between Jeff and those he serves fall under clergy privilege laws. This is one reason that attorneys often allow and encourage their clients to maintain relationships with Jeff while in active prosecution or litigation situations.

After an addiction to prescription opioids and serving almost fourteen months in a Federal prison for a white-collar crime he committed when he was a lawyer, Jeff started his own reentry – earning a Master of Divinity from Union Theological Seminary in the City of New York, with a focus in Christian Social Ethics. After graduating from divinity school, Jeff was called to serve at an inner city church in Bridgeport, CT as Associate Minister and Director of Prison Ministries. He, and his wife and partner-in-ministry Lynn Springer, then co-founded Progressive Prison Ministries, Inc. (Greenwich, CT), the world’s first ministry supporting the white collar criminal justice/economy exiled comunity. Jeff also serves on the ministry team at St. Joseph Mission Church (Cliffside Park, NJ) and as Chaplain to the Woodbury Fire Department (Woodbury, CT).

From 2016 – 2019, Jeff served as the Executive Director of Family ReEntry, Inc. (Bridgeport, CT), a 100+ person criminal justice organization with offices and programs in eight Connecticut cities. Jeff is the first person in the United States formerly incarcerated for a white-collar crime to be appointed as Executive Director of a major criminal justice nonprofit. A former practicing attorney and general counsel to major real estate organizations and closely held companies, he studied law at and earned a Juris Doctorate from New York Law School.

Among other recognitions, Jeff was twice selected as a Nantucket Project Scholar (2012, 2014). JustLeadershipUSA recognized Jeff as one of fifteen Inaugural National Leaders in Criminal Justice (2014). He was selected as a Keepers of the Commons Fellow (2017) and as a Keepers of the Commons Senior Fellow (2018). He has been the recipient of the Elizabeth Bush Award for Volunteerism (2011), received the Bridgeport Reentry Collaborative Advocate of the Year Award (2013, 2014, 2015) and received the Bridgeport Reentry Collaborative Professional of the Year (2016, 2017, 2018, 2019). Jeff has also been recognized by the Connecticut Coalition Against Domestic Violence (2017) and by the Connecticut NAACP (2017). He was selected as a 2019 Collegeville Institute Writing Fellow.

Jeff is also the editor of the important and widely-read blog, prisonist.org, at which he authors, edits and curates content around national and international criminal justice advocacy/ministry themes, and is Co-host of the Criminal Justice Insider podcast airing live on the first and third Fridays from New Haven, CT. He also leads a weekly online confidential White Collar/Economy Exiled Support Group (the first in the country); with over 150 participants, it has held over 170 meetings.

Jacqueline Polverari was a Social Worker for over 10 years and a partner in a large Title Company for over 15 years.  As an entrepreneur, Jacqueline had reached new limits of her career as an experienced professional with proven success in business and mentoring environments when a series of poor choices led her to a federal indictment and a sentence of almost a year in Danbury Federal Prison Camp for Women.

During her incarceration, Jacqueline dedicated all her time in helping other women who also found themselves in despair by making poor choices.  She helped to improve federal prison programs offered by teaching education classes, including accounting and GED Preparation to help with the reentry of women into the workforce after incarceration.  She successfully completed an intense program entitled GOGI, “Getting out by Going In” as well as completing Dave Ramsey’s money-management course “Financial Peace University”.  She found nurturing through a Bible Study Course studying the Women of the Bible along with her weekly participation in an Emmaus group which gave women the opportunity to share each other’s stories and explore their own spirituality and relationship with God.

After her release, Jacqueline entered a new phase of her life researching in depth about Mental Health, Crime and Criminal Justice while correlating it to reentry services.  This clearly grew into her passion after she had faced the many challenges of reentry.  It is clear to her that there is a lack of resources for reentry and there is a need for change.  She is working and advocating to be part of a change to come by dedicating herself to help fix this broken criminal justice system.

Jacqueline is currently an integral part in helping women prepare for entry and reentry of the Federal Prison System both psychologically and spiritually through mental health services and education of the system.  She has founded Evolution Family Reentry Services and is currently building resources by establishing nurturing partnerships with professionals in the mental health fields as well as employers and career placement agencies to help women and their families who face career barriers as they re-enter into society.

Jacqueline is a member of JustLeadershipUSA which is dedicated to cutting the U.S. correctional population in half by 2030.  She is also a member of The National Council for incarcerated and formerly incarcerated women and girls with a mission to end incarceration of women and girls. Jacqueline is also currently working with The Council of State Governments Justice Center to bring Judicial Work training to Connecticut.

She is an advocate for women’s incarceration issues by speaking at Women’s workshops and symposiums throughout the country.  She also is an advocate for FAMM, helping to spread the word to create a more fair and effective justice system that respects our American values of individual accountability and dignity while keeping our communities safe.

Jacqueline is working diligently to continue to work on herself as she has returned to school to obtain her Doctoral Degree in Social Work with a concentration in Criminal Justice.  She continues to speak at Women’s workshops and symposiums throughout the country and has been a featured guest on Criminal Justice Insider w/ Babz Rawls Ivy & Jeff Grant – The Voice of Connecticut Criminal Justice.  Most recently, Jacqueline was the keynote speaker at The Women in Mental Health Conference educating women in the mental health field covering system-level mental health strategies to maximize outcomes for women in the criminal justice system and ensure the sustainability of gender-responsive services.
By Jeff GrantSeptember 19, 2019Leave a comment
Tags: criminal justicecriminal justice insider with babz rawls ivy and jeff grantcriminal justice reformdivision of justice and law administrationevolution reentryfaithFederal prisongeorge kaingreenwichgreenwichcthopeincarcerationjacqueline polverariJEFF GRANTjustice and law societylynn springermarilyn kainprisonprison coachprison consultantprison ministerprogressive prison ministriesrecoveryredemptionsecond chancespiritualitywcsuwestern connecticut state universitywhite collarwhite collar expertswhite-collar crimewhite-collar support group
Share this post
Share on FacebookShare on Facebook Share on LinkedInShare on LinkedIn Pin itShare on Pinterest Share on WhatsAppShare on WhatsApp TweetShare on Twitter