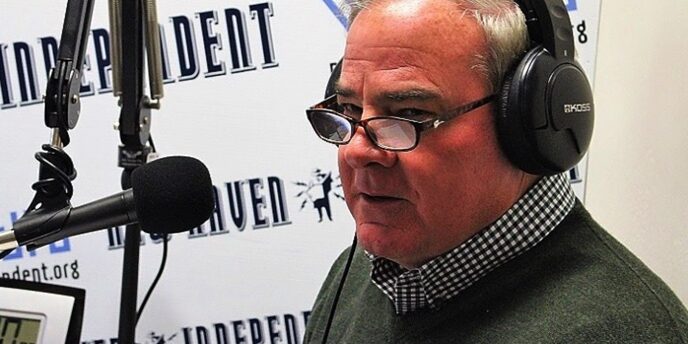 By Thomas Breen, Reprinted from the New Haven Independent, April 5, 2019

Former Gov. John Rowland has seen the most right-wing of Republicans and the most left-wing of Democrats converge on at least one issue since the height of his political career two decades ago: criminal justice reform, an issue he has experienced firsthand from all sides.

“The sands have shifted dramatically,” Rowland said Friday on the most recent episode of WNHH’s “Criminal Justice Insider with Babz Rawls-Ivy and Jeff Grant.”

The bipartisan political mindset in the 1990s was to be “tough on crime” with mandatory minimum and three-strikes-and-your-out laws, he noted. Now the rare moments of political consensus today center around laws like the First Step Act, which both the conservative Koch Brothers and the liberal American Civil Liberties Union worked with the Trump Administration on in an effort to reduce federal prison populations and bulk up reentry support services.

Rowland, who currently serves as the Northeast development director for the Christian nonprofit Prison Fellowship, is uniquely qualified to comment on how mainstream political common sense has changed over the past four decades. In Connecticut, he’s spent many of those years right in the middle of it.

In 1994, at just 37 years old, he became the state’s youngest governor. He served in Hartford until 2004, when he resigned amidst a corruption investigation, and served 10 months in federal prison after pleading guilty to charges related to taking $107,000 in favors from state contractors. It was the first of two convictions and prison sentences.

“The world has changed,” Rowland said as he reflected on how Republicans and Democrats alike in the 1980s and 1990s used the specter of gang violence and drug dealing to lock people up in record numbers.

That mindset led to a skyrocketing in the country’s incarcerated population from around 420,000 in the early 1970s to around 2.3 million today.

He said that evangelical Christian organizations like the one he works for as well as racial justice advocates and civil libertarians have formed a bipartisan coalition focused on reducing mandatory minimums and racial disparities in sentencing, closing prisons, and helping the formerly incarcerated finding housing, work, and meaningful social and spiritual support systems.

“We know how to be tough on crime,” he said. “Now we have to be smart on crime.”

Rowland was also asked how he thinks now about his two stints in federal prison. The first came in 2005, when he served 10 months after pleading guilty to charges related to taking favors from state contractors; the second came in 2014, when he served 15 months for arranging to be paid to work secretly as a political consultant on two congressional campaigns, in violation of federal campaign finance laws.

Following is an exchange Rowland had on Friday’s program with WNHH hosts Babz Rawls-Ivy and Jeff Grant about where he stands now on his convictions and time served.

Rawls-Ivy: When you find yourself about to do this for the second time, what’s your thoughts? How did you feel?

Rowland: You look at the motivation. When this first started to occur a few years ago, my lawyer went down to meet with the prosecutors, and they said, ‘Your guy didn’t do enough time 10 years ago. We’re gonna get him.’ OK. This is going to be a problem. It took them about a year ago to put things together. And then you look back over your shoulder, trying to figure what the motivation was, and you see that the guy that went after you, before you’ve even gotten down the steps of the courthouse, he’s running for governor. Oh, that’s interesting. That explains a lot. He had gone after a couple of Democrats and he needed to beef up his meal ticket. So that’s why he went after me. So you understand the motivation. Once you understand that, one of the things I always council people on before they go away, is to leave bitterness behind. If you go into that facility and you’re bitter and you’re mad and you’re angry, you’re the only one that’s going to suffer from that. …

Rawls-Ivy: Did you have an opportunity to apologize or be sorry? Do you feel sorry for whatever you were charged with? Because I know people want to make you sorry.

Grant: The second time or the first time?

Grant: Anybody who goes through the system … in some respects, they know that they’re a political refugee. It’s set up for winners and losers. … This is a conversation that has to happen in order for people to reconcile what’s happened to them. But that doesn’t relieve them necessarily of their responsibility and of their need to show remorse and ask for forgiveness. Where are you in that spectrum?

Rowland: Let me put it this way. If I felt that I did something wrong and I’d ask for forgiveness, I would have done a plea deal. But I went to court and I fought it. I went to appeals. The law firms even came in and did all this stuff pro bono. If they did this stuff pro bono, there must be a reason behind it. They took it to the [state] Supreme Court.

So, if you look at the criminal justice system, it is fragmented, with things that take place in the urban communities, but the political motivations that are now coming out are much worse than they were a million years ago. And I say this because if you think you’re safe, look at what’s happening [to President Trump]. Here he is, the most powerful person on the planet arguably, whether you like him or not, a couple of prosecutors decided that they were going to go after him, and they spent two years. But here’s what’s interesting. Can you pursue another human being, another law abiding citizen, if there’s no evidence that a crime has been committed.

Rowland: There was no evidence that he committed any crime. And yet’s he’s been investigated.

Rawls-Ivy: We don’t know that. We don’t have the Mueller report. We have Barr’s interpretation.

Rowland: I’m not going there. If they had something, they would have indicted him. My point is, the motivation to start the investigation, there was no blatant evidence of a crime that had been committed. Leave the politics alone for a second, if prosecutors can go after the president of the United States and torture him and his family and his friends, imagine what they can do with ordinary citizens.

Rawls-Ivy: As the only person of color in this room, I just find that whole statement upside down.

Rowland: It has nothing to do with color. What I’m suggesting is that, when prosecutors decide to pursue somebody, it doesn’t matter who they are.