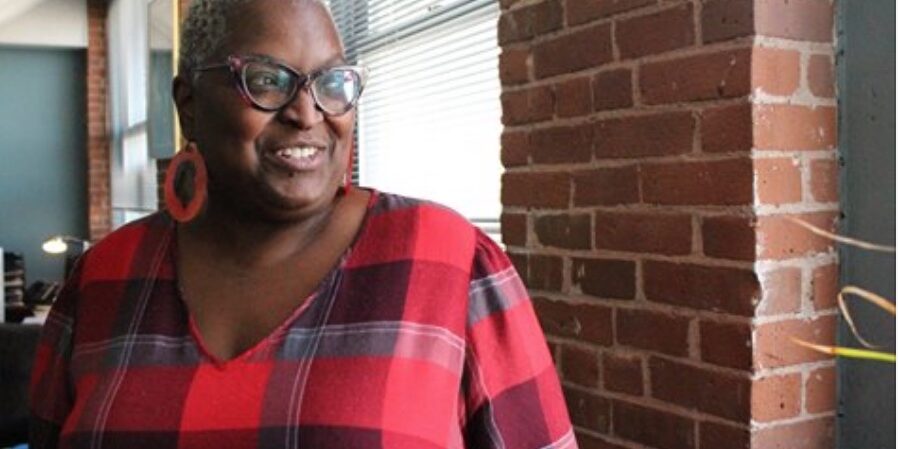 If you want something done your way, you’ve got to do it yourself.

“Do our own thing” is the mantra of Babz Rawls Ivy, the editor of Inner-City News. For more than 25 years, the weekly paper has published local, regional and even international stories of importance to black New Haveners. Every Wednesday, Ivy says, 25,000 copies are distributed to supermarkets, mom-and-pop stores, barbershops, hair salons, pharmacies, schools, libraries and elderly housing from New Haven to Bridgeport.

The paper, she explains, is “designed to talk about the interests of black people for black people to black people. We don’t pretend to be anything other than that… We recognize that people get their news from all kinds of sources, but people are not getting black news.” That means topics like health disparities, housing redlining, poverty “and then good news, too,” she says. Each issue features four front-page teasers: photographs and headlines ranging from local (“Cookie Novices Learn from the Pros”) to national (“ACA Enrollment Surging, Even Though It Ends Dec. 15”). Inside, the paper sometimes covers international news, such as the planned appearance of the first-ever Nigerian women’s bobsled team in the upcoming winter Olympics.

As a weekly publication, Inner-City is never going to scoop the dailies. Instead, Ivy says, “We have the ability to take a longer gaze at things. We put things in there that require a longer discussion, and we harken back to the days of the black intelligentsia, where people could spend the time to talk about things that were unique to our communities in very, sort of, purposeful ways… Everything is so fast now, and people don’t have the patience to delve into conversations.”

The media landscape, too, has changed since Inner-City News’s beginnings. Today Ivy is part editor, part collector. She edits pieces from freelancers and even from local residents willing to take a crack at reporting on their own events. The latter runs the risk of diminishing editorial independence and credibility, but Ivy sees it differently. “I always tell people, no one tells your story better than you,” she says. “Even if I came to your event, I couldn’t tell a better story than you… It’s your story.” People who are fearful of putting their own writing and photography out into the world need not worry, she says. “I will edit it… I got you! I’ll make you look good!”

As for the collecting part of her job, Ivy gathers and compiles stories from other media sources, stitching together a new and colorful publication. A symbiotic relationship with the New Haven Independent—Ivy hosts a daily radio show for its station, WNHH—allows her to cull local material of interest to her readers from that publication. She also draws frequently from CT News Junkie and several wire services. “We don’t have the resources to hire a bunch of reporters to go out there and cover everything that’s happening in this city,” Ivy says.

Not everyone was happy about the paper’s shift to relying more heavily on the Independent and other publications for content. “They felt like black papers ought to preserve blackness in a way that should not align itself with anybody else,” Ivy says. But the New Haven Independent has “a team of writers over there who are really good, who are covering things in our community that we wouldn’t be able to cover,” she says. “It just makes sense.”

Inner-City News publisher John Thomas’s father started a black newspaper in New Haven in the 1960s, so launching this paper was a natural project for him, Ivy says. She praises her boss for giving her free rein to edit the news as she sees fit. “The paper does not reflect his political views or his feelings or his leanings or any of that,” she says. Instead, she characterizes Thomas’s attitude as, “‘I just want to put a paper out there and let black people decide what they think is newsworthy.’ And that has always been his focus.”

In its many incarnations, Inner-City has had a newspaper in Waterbury and a sister paper in Spanish, El Reportero. “We’re all interconnected,” Ivy says.

That interconnectedness has helped Inner-City News survive and, in turn, connect its readers to one another and the world.