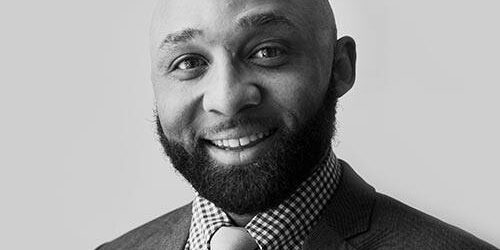 Friday, June 7, 2019, 9 am ET, Louis L. Reed, National Organizer for #Cut50, was our guest on The Criminal Justice Insider Podcast with Babz Rawls Ivy & Jeff Grant – The Voice of CT Criminal Justice. Live on WNHH 103.5 FM New Haven, rebroadcast at 5 pm. Live-streaming and podcast everywhere, see below. Sponsored by the Community Foundation for Greater New Haven – Now More than Ever.

Louis Reed is the National Organizer for #Cut50, an initiative of Van Jones’s Dream Corps. He brings to #Cut50 years of experience in government, criminal justice expertise, policy advocacy, business, and public health.

Louis holds degrees in criminal justice and psychology, and is a board-certified addictions counselor and licensed alcohol & addictions practitioner. Prior to joining #Cut50, Louis was the Connecticut Policy Strategist for the Katal Center for Health, Equity and Justice where he worked on SB-13, and ran his own addiction and mental health practice in Bridgeport, CT, serving clients across Southern Connecticut.

Louis’s experience in government includes conceptualizing and serving as director of the Mayor’s Office for Reentry Affairs in the City of Bridgeport, CT. There, he developed systems and practices for the City to coordinate employment, housing, access to treatment, and other services for all persons impacted by the criminal justice system both in and returning to the City after incarceration.

His policy reform experience includes working with the Connecticut legislature for successful enactment of legislation related to reforms to pretrial practices, expanding access to licenses for people living with criminal records, limiting asset forfeiture practices by law enforcement, and strengthening reentry practices and services for people returning from prison.

Louis is a Huffington Post contributor on Prison Traumatic Stress Disorder, has appeared on C-SPAN and MSNBC, and in the Wall Street Journal, The New York Times, and other publications. He has also consulted for the White House, United States Department of Justice, Fortune® 100 Corporations, private, state and federal agencies, and is a 2017 JustLeadershipUSA fellow.

Louis has received many awards recognizing his work and leadership, including the US Senate recognition for Professional of the Year; 2017 Best Innovative Practices by the US Conference of Mayors; and a 2018 citation from the Connecticut State General Assembly for his statewide contributions on best reentry practices and community service.

Please tell your friends, colleagues and clients:
The Criminal Justice Insider Podcast with Babz Rawls Ivy and Jeff Grant is broadcast live at 9 am ET on the first and third Friday of each month from the WNHH 103.5 FM studios in New Haven. It is rebroadcast on WNHH at 5 pm ET the same day.

https://www.cfgnh.org/LeadingOnIssues/IncarcerationandReentry/CriminalJusticeInsiderRadioArchives.aspx
An article about each show is published a few days later in the New Haven Independent (newhavenindependent.org).
Please “like” us on Facebook!
More info here.
Contact us: jgrant@prisonist.org
Season Two Guests: