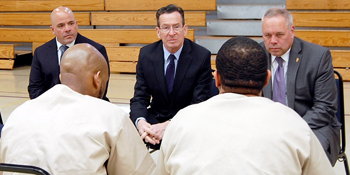 By Steve Hawkins —
NB: This is part of a series of interviews conducted by Steve Hawkins, president of the Coalition for Public Safety, featuring individuals taking the initiative to change the justice system within their sphere of influence.

How deeply should brain science inform our approach to crime? In many justice reform circles, that’s up for debate. Research showing that human brains do not fully develop until the age of 25 has led many correctional leaders to reconsider the age at which young people “age out” of the juvenile justice system. If younger minds are more amendable to treatment and rehabilitation, the logic goes, why not take the opportunity to get things right?

Enter Scott Semple, commissioner of the Connecticut Department of Corrections. Connecticut’s journey to justice reform has already produced a notable decrease in both the crime rate and prison population, freeing up space and resources for Semple and others to more expansively rethink how to effectively administer justice. Semple has taken that opportunity to hone in on youth incarceration and recidivism with the creation of the T.R.U.E. Unit — a program for incarcerated young adults within the Cheshire Correctional Institution, designed specifically for 18–15 year olds. Young adults incarcerated at Cheshire are taught both practical and relational skills with the goal of helping them avoid the cycle of recidivism and emerge capable, compassionate adults.

I had the opportunity to connect with Commissioner Semple about his vision for the program at length. The interview has been edited for clarity.

S.H.: What was the source of inspiration for your new second chances initiative at the Cheshire Correctional Institution, and why are you launching it now?

S.S.: In 2015, I had the pleasure of visiting prisons in Germany with Connecticut’s governor, Dannel P. Malloy, and members of the Vera Institute of Justice. Among the many remarkable things I witnessed was a prison facility, which housed only young adult offenders. The operation of the facility was geared to the specific needs of that age group.

The goal was to launch a similar facility within the Connecticut Department of Correction. Initially, we had hoped to dedicate an entire facility to the needs of young adult offenders, but due to fact that this was a groundbreaking concept, coupled with a difficult fiscal climate, the decision was made to start out by opening a single unit within a facility. After much planning and hard work, the unit officially went online in March 13 of 2017.