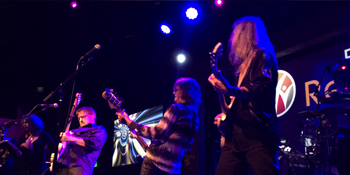 Fairfield CT – (April 17, 2017) — Blue Coupe, with some help of the talented young musicians from School of Rock (Fairfield) as the Opening Act, rocked the FTC Warehouse on Thursday night in support of Family ReEntry, a nonprofit leader that assists families affected by the criminal justice system.

Blue Coupe, the supergroup formed by former members of Blue Oyster Cult and Alice Cooper band, performed tracks from their upcoming new album as well as classic hits Don’t Fear the Reaper, Burning for You, School’s Out, and No More Mr. Nice Guy, among others. The benefit concert was a major boost to help fund Family ReEntry’s expanded advocacy efforts and programs that restore dignity and renew families that have been impacted by incarceration and the justice system.

Jeff Grant, Executive Director of Family ReEntry, said, “What an amazing night! We are truly grateful to Blue Coupe and School of Rock for putting on such a tremendous show. With their help of so many supporters and music fans, we are now able to advocate for a more responsive justice system and offer programs that can help the thousands of individuals and their families, who will be released from correctional facilities (in CT) this year alone.”

This year, Family ReEntry continues to support, not just the individuals who are reentering society after incarceration, but the families and friends of those individuals as they transition. Family ReEntry provides vital services to help individuals and families in the areas of prevention, intervention, diversion, in-prison and reentry.

“The situation can seem overwhelming to those most affected, but there is help,” Grant explained. “Men and woman and their families who come through Family ReEntry are succeeding in making positive contributions and improving their lives. While national averages show a large percentage of this population returning to prison, we are seeing that Family ReEntry’s work is significantly lowering that percentage.”

Currently, there are over 2.3 million people incarcerated in the United States and over 70 million with criminal records. “It is vital that we reach these individuals at critical junctures in their lives and provide them with enough support so that they can have every opportunity to achieve, learn and grow as citizens who are not forced to return to the kind of activity that caused them to be incarcerated in the first place,” said Grant, a man who knows very well of the difficulties that formerly incarcerated individuals can face. He served almost 14 months in Federal prison for a white-collar crime he committed in 2001 when he was a lawyer. Grant said. “As the first person in the country formerly incarcerated for a white-collar crime to be appointed as Executive Director of a major criminal justice nonprofit, I try to be a role model that there is hope after prison.”

According to Fred Hodges, Family ReEntry’s Director of Community Affairs, “I owe Family ReEntry my fresh start after prison; I am deeply grateful for the faith and confidence they have in me. I pay it forward every day by helping others going through criminal justice difficulties.”

More about Blue Coupe:
Blue Coupe’s multi-talented entertainers include Rock and Roll Hall of Famer, Dennis Dunaway bassist of the legendary Alice Cooper group, alongside multi-instrumentalist, Joe Bouchard who founded Blue Oyster Cult with his brother Albert Bouchard master of the drums. These revolutionary originals were the heartbeat of several of the best-known songs in the history of rock. And note for note, their full-throttle expertise hits you over the head and grabs you by the heart in Blue Coupe. The band has found continuing glory with their highly-acclaimed album, Tornado on The Tracks, which has multiple Grammy considerations in 2011 and 2012, including “Angel’s Well” featuring Robby Krieger legendary guitarist for The Doors. And Blue Coupe continues to tour North America and Europe with such illustrious shows as the Halloween Parade in New York City where they were seen by more than a million people. Blue Coupe’s second album, Million Miles More, features Alice Cooper, Tish and Snooky from Manic Panic, Ross the Boss from Manowar and the Dictators, Buck Dharma from Blue Oyster Cult and Goldy McJohn from Steppenwolf as special guest stars. The album was mixed by Jack Douglas (Aerosmith, John Lennon, Cheap Trick, Alice Cooper, BOC) and Warren Huart (Aerosmith, The Fray, James Blunt). The new single “Hallow’s Grave” with vocals by Alice Cooper has been submitted for Grammy consideration. Listen to the latest songs from Blue Coupe here.